My Cholesterol Dropped 62 Points Without A Statin Drug!

This is a long post.  It needs to be to tell the full story.  If you want to cut to the chase, use the links in the Post Breakdown to the right or scroll to the bottom for resources.

I am super pumped and just wanted to share my joy.  So, here it goes….

October 2017, I had some labs run for my annual physical.  All was well, except my cholesterol was up more than usual.  I have always had high cholesterol, even in the healthiest, most active stages of my life – my 20’s and 30’s.  I mean, back then I exercised a couple hours a day, ran around chasing rug-rats and weighed less than 120 pounds! Back then, borderline was a lot higher than it is now so there were no worries.

Anyway, in the last three years, I have been tracking a little more closely.  I’m getting older and don’t want to die anytime soon, right?

I don’t know why my cholesterol is high, it just is.  Twenty years from now, we may find that it isn’t high at all.  I hope I am around then!

Researching How to Lower My Cholesterol Without Statin Drugs

For now, I will try to monitor and stay within the guidelines we have.  But, what are the correct guidelines?  I have done lots of research because I don’t like taking anyone’s word for something that affects my health.  I mean, I have a family that needs me.  It’s my responsibility to take care of myself.

The thing I find as I do my research is that there are lots of opinions on what is healthy and what is not.  Just do a Google search on HDL, LDL, Cholesterol, etc.  You will find so much more than you can possibly read or understand.  At least, that is what I find.  So, I turned to a friend.  Well, he’s not a personal friend, but a TV friend.  Let me explain…

Where It All Began

When I was twenty-three years old, I had TMJ surgery.  This involved six hours of surgery that removed and replaced my top and bottom jaw bones.  My mouth was wired shut for eight weeks.  All of my meals were liquid and inserted through a tube between my teeth and cheek.  While I was in the hospital I was given antibiotics just in case I got an infection.  I was sent home with a prescription for more antibiotics.  I never got an infection.  I got something much worse.

I went from doctor to doctor trying to get relief.

For the next eight years, I suffered with all kinds of ailments.  The worst thing was these large rings all over my body.  Mostly on my hands and arms.  They looked like ring-worm, sort of.  I went from doctor to doctor trying to get relief.  None could tell me what it was.  Most said it was contact dermatitis – basically I was allergic to something.  So, I spent eight years avoiding everything.  Still the rings continued.  I had terrible tummy aches, head aches, sinus infections, body aches, phantom pains, thought I was going crazy.

Then one day, I made a last ditch effort to find out what these rings were that infested my body and how to get healed.  One of my doctors referred me to a doctor in another town.  It was her last day on the job and she only gave me about two minutes of her time. Actually, I was her very last patient.  She looked at my hands and said it is “wwawawwa”.  I grabbed a piece of an envelope and a pen from my purse.  Handing it to her, I begged her to please write that down for me.  She wrote Granuloma Annulare.

I finally had a name to this plague.  However, she continued to tell me to smear this steroid cream on a few days and it would lighten.  I would have it forever.  If it went away for any amount of time, it would still return.  “It always does”, she said.

Great, I really did have the plague.  I would die with it or so I thought.

I went to the library on the way home.  This was way back before the Internet was commonplace.  If you had it, it was dial-up.  We often joked, we could go do a load of laundry between clicks!  It was slow and not much more than an online shopping mall.  That’s another story…

Reading every medical book I could find the next couple of days just made me more desperate.

There was no hope of getting well, but God is good.

As I was doing laundry, I walked past my TV.  It was playing a show with this man talking about supplements, mold and fungus.  Yes, I had a very wild life back then.  Laundry and fungus!  Haha.

This man caught my attention when he said the name of the plague I was facing.

Then he flashed the name on the screen.  I thought I would pass out because the next thing he said was there is a simple cure!  What?  I dropped the laundry and sat down to listen.  The next few minutes changed my life forever.

He taught me how to heal my leaky gut that the over use of antibiotics had caused.  He gave me concrete, well documented steps and an easy to follow diet.  Not only were my rings healed, every other ailment began to fall off too!  I am so thankful for the day I met Doug Kaufmann.    (I do not get any compensation for telling you about this man or TV program)

We started this post talking about cholesterol.  I’m getting back to that…

God is so good.  I told you that earlier, I know.  Man makes his plans, but God directs his steps.

So October 2017, I got the report about my high cholesterol.  I was terrified.  The doctor was so grim.  Statin medicine was needed, no doubt about it.  In fact, I felt like if I didn’t start the medicine before I left the doctor’s office, I may die on the way to my car.  Except, I have this friend on TV that has helped me when doctors couldn’t.  He talks about the side effects of statin drugs.

I have to confess that I hadn’t watched Doug regularly in years.  We moved, had different cable TV.  You know, I was better or so I thought.  We just lost touch.  Then one day I was on Facebook and I saw him.  I liked his page.  I started watching his internet show.  So when I got the news in October and was in the kitchen cooking dinner, my computer was on the counter, where I never put it.  I was scrolling for a recipe and there was Doug.  He had a guest on the show talking about lowering cholesterol naturally, without statin drugs!  Ain’t God good?  I know, He just overwhelms me sometimes.  I mean, He put Doug Kaufmann right in front of me again, right when I needed help! 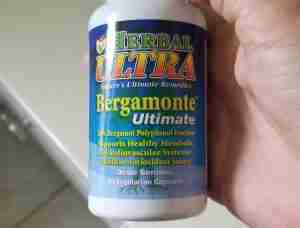 I don’t remember the name of the man, who was talking that day, but I do know his company.  I went to the website right away.  Herbal Ultra offers Bergamonte Ultimate.  This is not an affiliate link.  I am not compensated for any purchases from Herbal Ultra.  It is for your information only.

Since I trust Doug to only have guests with products that really work, I went to the site and bought my first three bottles.

Thinking I would just give it a try and if it didn’t work I guess it would be on to the statin drug route.  I felt better pretty quickly.  I’d added the Bergamonte Ultimate to my supplements, along with CoQ10 and B-Complex.  I already was taking Fish Oil.  Niacin is supposed to be helpful for lowering cholesterol in high doses, but I just take the regular suggested dose in my B-Complex.  Fish Oil is suppose to be helpful, as well.  CoQ10 is recommended when taking statin drugs and Bergamont.  So, I figured I was pretty much covered.

The Bergamonte Ultimate calls for a little higher dose the first month and then a maintenance dose once labs show the desired numbers.  I did the higher dose the first month.  Then the maintenance afterwards.  It’s been eight months, I should have had my labs run at six months or sooner.  Labs are not my forte.  Anyway, I’m trying to reschedule my annual physicals to August instead of flu season, so I went at eight months.  I really wanted to give the Bergamonte Ultimate plenty of time to work.  In fairness, I was really scared to see the doctor.

My total was down 62 points!

This morning I got the results back.  My total was down 62 points!  Okay, I know I told you that in the title of this post.  How else would I have gotten your attention?  But, I will also share my full test results with my last three tests side-by-side.  Keep in mind that the test I am about to share is a Cardio IQ Advanced Lipid Profile Panel.  It will look different from the run-of-the-mill Lipid Profile.  Not only does it show the totals, it breaks down the particle sizes and pattern type.  I encourage you to do some research on the particle size and pattern type implication and you’ll find out why I insist on the full test.  In my state, it is offered at Quest Diagnostic.  My insurance paid for it, although the doctor did not think they would and she didn’t really know what the test was when I asked for it.  So, know what you want when you ask for it should you decide to have a more in-depth picture.  My doctor did not know the significance of the particle sizes and pattern type either, so she was grim back in 2017.  Prior to that visit, I had reviewed the report with the knowledge I had gathered on the test.  That’s how I had strength enough to walk out of the office that day without accepting the statins.  I am not advising you to do as I do, I’m just telling you what I did.  Here’s the test results I promised.

I came home that day, in 2017, and started exercising.  Running on a mini-tramp to be precise.  It’s fun and not too hard on the knees, but boring.  Walking is good, but hot in my area.  We don’t have seasons or rather we only have one – HOT.  I wish I could exercise more, but my knees often get the better of me.  These are not excuses.  I am telling you this because the results I got were with minimal effort other than taking my supplement and eating well.  With more activity, I would probably have better results.  I have room for improvement.

So, today I grabbed my Samsung Note 8 and started walking — around my house!  My kitchen is located in the center of my home and one can walk around from room to room around the kitchen, sort of a built-in walking track. 🙂

Seventy-five laps around my kitchen is .62 miles.  At 2.4 mph it took 15 minutes to walk. How ’bout that?  I can walk without the heat and mosquitoes.  Notice the route.  Ha ha.

Please don’t take my word for anything when it comes to your health.  I am not a doctor and do not play one on TV!  Be informed.  Make educated decisions.  It’s your life.  You only get one, live well.

Resources That Helped Me

Published Research – Get a PDF

This site uses Akismet to reduce spam. Learn how your comment data is processed.